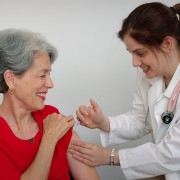 Have you had your shingles vaccine yet?

Researchers reported on December 15, 2015 that a study found that shingles isn’t just painful.  It can cause death through heart attack and stroke.

Shingles is also called herpes zoster and is caused by the same virus that causes childhood chicken pox.

Currently there is a vaccine that can reduce your risk of contracting the illness by 51%.  An NBC article reported that Zostavax is only about 70% effective and this efficacy drops to below 40 percent in people 70 years old or older.  This vaccine has very little side effects.

On the horizon is a new vaccine that seems to work better than the current vaccine, protecting more than 97% of people against the condition – even the very oldest.

The vaccine, made by GlaxoSmithKline, isn’t on the market yet.  More advanced trials are still needed.  This new vaccine has some side effects that some in the study reported as severe.

But with the new information about the dangers of Shingles, it is probably a good idea to get your vaccine soon.  Your risk of shingles and PHN increases as you get older. CDC recommends that people 60 years old and older get shingles vaccine to prevent shingles

Adjust Your Holiday Expectations For Seniors with Dementia
Scroll to top